Give Joe The Bird

There are lots of crazy things on the Internet that make me laugh but when one can roll laughter and raising money for good causes together then I'm totally in.  I normally don't plug stuff but this is something that I couldn't resist spreading the word about.

If you've never been to Fark.com it's a great site to get twisted headlines of real events around the world. A number of Fark's loyal readers decided to take something fake and turn it into something real.

To buy Vice-President Joe Biden a Trans Am!!
http://www.givejoethebird.com

Donations will be used to purchase the car and auction it off for charity. All proceeds will be distributed to the Biden Breast Health Initiative, Doctors Without Borders, the Wounded Warrior Project and GLAAD.  Please visit the website for full details and all the laughter that goes with it.

While I'm at it I'm going to draw attention to the Leary Firefighters Foundation.
http://www.learyfirefighters.org/

After recently hearing stories about my grandfather who passed away before I was born and the things he did as a firefighter and as Chief made me appreciate firefighters even more.  I can only imagine what it was like when my grandfather went to go see the departments first fire engine built. There was the story of  him devising the first alarm system for the firefighters and the time he carried a young girl in his arms to the nearest hospital during a blizzard because the truck couldn't get through.

Every day firefighters are doing amazing things and sadly some departments don't have the resources they need to do their jobs.  Please read more about the Leary Firefighters Foundation at the link above or check out more about your own local Fire Department.

Please know that I'm just bringing attention to the things and making a simple suggestion to check them out. I am in no way asking you to donate.  I leave that decision up to you.

Posted by Maynard at 6:22 PM No comments:


My friend Zenne does a lot of wonderful things.  When she has a moment between her creative endeavours she makes her own dance/music videos.  This is one of my favorites.

Posted by Maynard at 4:55 PM No comments:

My full-time job is keeping me rather busy these day.  I come home dead tired and find I don't have any energy to turn on my laptop and edit a piece of writing I've been working on.  I am still journal writing so at least I'm doing something.

I don't splurge much these days - who can?  I did break down and buy a Kindle Fire.  The verdict is still out on it. I've read two books so far! It's not a bad gizmo and has been a nice thing to have while wandering around the house. It does come in handy when you're describing something to someone and they have no idea what you're talking about.  I can show a photo, a news story or share a piece of music. It sure beats firing up the laptop!

I'm actually thinking of buying one for my parents, both of whom do not own a computer but the Fire is simple to use.  I had my father who admittedly prefers DOS over Windows, play around with my Kindle for 30 minutes.  He didn't struggle with it at all once I showed him how it worked.  He has an easier time using the Kindle than the cell phone I bought him.

I have not had time to explore music which is something I enjoy as most of you know.  I have recently bought a CD by Sunstorm: Emotional Fire which is project of singer Joe Lynn Turner. 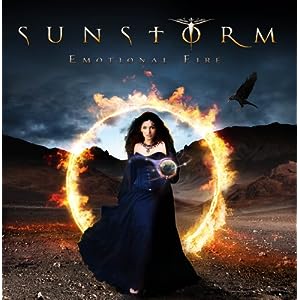 A friend thought I should give it a try.  Thankfully, the music reviews of Classic Rock and Metal Hammer magazine keep me updated.

Speaking of music, I hope that Dave Mustaine of Megadeth is doing okay after being allegedly hit by a rock at a music festival in Croatia. Reports are mixed on whether he was hit in the head or if he was hit in the left hand.   I sincerely hope he and the rest of the band are well.  What happened is unfortunate and I feel bad for the Megadeth fans who could not enjoy a full set of great music.